In the movie Gran Torino, Walt Kowalski goes to a priest for confession of his sins to fulfill his wife’s final wishes. One burden the character, played by Clint Eastwood, releases from his conscience is the making of a few dollars on a boat he bought and sold for cash. Walt had failed to pay taxes on this income knowing it could not be traced by the IRS. 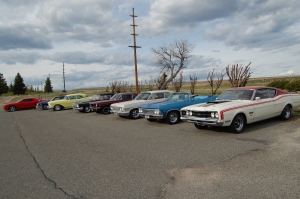 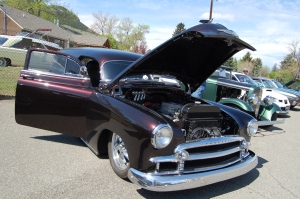 How common is the practice by weekend wrench turning types of stiffing the IRS of a few bucks? According to the website NOLO.com the underground economy costs the US $500 billion in tax revenue per year. One eBay seller actually posted a statement that he would only accept forms of payment that would not be reported because “I am not gonna pay $3000 to the government to sell my car.” He made this statement even though he owns a wrecking yard that buys and sells car for profit everyday.

The next time you are at a car show dreaming of owning that Street Rod with the Fifty Thousand Dollar price in the window, just remember the price might be Thirty Five Thousand if you offer to pay cash, no receipt required. Maybe you don’t want to carry the burden on your conscience, like Walt Kowalski.

Gran Torino at blast from the past car show 2012. Bill took the photo. Scott admiring the laser stripe.

Ford Motor Company built the Gran Torino at the end of the muscle car era. Ralph Nader, insurance companies and environmental regulations were changing the automotive industry. Gone were the ground pounding, high compression, two-four barrel carburetor, big blocks of the sixties. The 1972-1976 model years had the looks of the factory hot rods, but not the performance. They were fast for their day,but smog equipped meant less power. The classic car market for these cars had always been weak.

Clint Eastwood appeals to “the guy” in every man. His character is misunderstood by everyone but the movie audience. He communicates poorly with friends and family. Bad guys shake at the sight of him. Now Clint Eastwood makes a movie titled Gran Torino. He owns a Gran Torino in the movie. As I watched the movie I thought the value of those cars is going up right now. Thank you Mr. Eastwood.

Pictured is a 1972 Gran Torino at the Blast From the Past car show in Helena, Montana. The value of the car has increased considerably according to the owner. A benefit I had not anticipated was parts availability. Any restoration relies on the availability of model specific pieces. The Gran Torino Sport had an optional laser stripe on the side with a fading color scheme that is very hard to recreate in a paint shop. The desirable option had been out of production for years. Since the movie Gran Torino, the demand is high enough for graphics companies to reproduce the laser stripe. Cars that may not have been restored to their full glory are back thanks to the power of the media. I love America.