We cruised the north side of Canyon Ferry lake to the Norwegian Wood Golf Course. The setting is part golf course, part retro railroad depot, part ranch. They raise Highlander beef cattle on site. I was told there will soon be pork on the menu, much to the chagrin of the pink skinned critter I saw wandering around the corral.

Be very hungry if you order the Avalanche burger with potato salad and chili. The chili on this burger made me feel guilty. It is simply too good to be ordered as a topping on an entree.

The red solo cups you see in the photo are not standard fare. They have a significant wine and specialty brew selection. As we were all cruising cars that cost more than our first house, on a very sunny day, water and lemonade hit the spot thank you very much.

Reservations requested for four or more in your party. 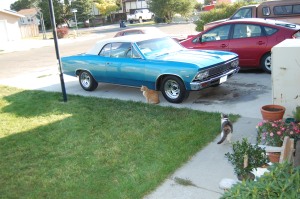 I was eleven years old the first time I saw this car. My sister Charolotte was at college in Logan, Utah. Her boyfriend Dave had just returned from basic training with the national guard. He came to live at our house in Montana. He showed up at the house in this 1966 Chevy Malibu Convertible. I just found out (4 July 2012) this purchase was destined to be a good thing. The purchase was sealed with a Kiss. Dave’s mom, June Kiss, co-signed the loan for him to buy the car. I remember riding to Morony dam east of Great Falls. His friends had a swimming pool at their house. My younger sister Cori (5 years old then) has the same memory, as Dave let her steer the car on the dam road.

Dave and Charolotte eventually married. My dad lost a daughter, but I gained a new Chevy. Just kidding Dave, love ya.  As their family grew the convertible just wasn’t practical. Run the heater all you want at -15 with that canvas top you are not warming up. They upgraded to an Olds Toronado and sold the car to Cassie, my next older sister.

Cassie also has children and lived in Montana, but is more a free spirit than Charolotte and carried a few extra blankets and coats on family trips. Cassie’s free spirit lifestyle led to me purchasing the car at a deeply discounted price ($125). The catch was I had to retrieve it from a ditch before the county hauled it away. No problem, I was an old hand at getting cars out of ditches. I had put plenty of them in the ditch on my own account.

A friend, Tom, and I took my dads truck to the crash site. We soon had all 4 wheels of the Chevelle on the blacktop. After an adventurous drive home, Tom drove the truck, we disassembled the brakes and put them back together. Driving was much more comfortable with all wheels slowing at the same rate. Sure the body now had quite a few dents, dings and scrapes but I got it on the road same day I brought it home. Some guys might have given it a thorough inspection, but I had an A&W Root Beer calling my name.

A few months after buying the car the transmission started what my mom called “acting up”. It was slipping if you drove very long, but was OK for short trips. the OK trips got shorter and shorter. Finally the car would not go at all. I bought another car to drive while I “fix up” the Chevelle. I still own that Mustang.

After about 8 years in the back yard my mom begged Dennis Woolsey to rescue the convertible. Having been on an automotive rescue mission his entire life (427-57 Chevy, 55 Nomad, Buick Riviera, 55 Chevy Gasser), he brought a trailer and took it to his home in Salt Lake City. Dennis spent many years and a few parts cars completing the restoration. Shortly after completing the Chevelle project he decided to retire and move to smaller house. Having a needs a garage always, occasional driver did not fit that plan. He offered to sell Dave and Charolotte the car, but they had just purchased a Model A from a neighbor so they didn’t have room for it.

At the same time I was retiring early from my full time job. My wife and I had not been getting along. I was living in a friends camp trailer on a piece of property Charolotte owns. On a phone call to see how I was doing she mentioned Dennis was looking to sell the old car. Immediately I called to get a price. Being the more practical type, he suggested it might not be the best thing to do with my life up in the air and all. Oddly enough my wife gave me the same response.  I indicated if that is what it hinged on the marriage was probably over anyway. The next day I called Dennis, got a number, wrote him a check, mailed it. He called a few days later “Maybe I should send this check back, I don’t know.” I said, ” Well I am already being charged interest on the loan you better stick that thing in the bank.” I went to Salt Lake City a couple months later and picked up the car. I have driven it almost five thousand miles since 2008 and don’t have a bit of regret over the purchase. My grandson, Aiden, loves going for A&W Root Beer with the top down. The circle of life goes ’round.